Signs by Van pioneers Fusion 360 for sign making, reducing material waste to only 3%

For family-owned sign making company Signs by Van, staying relevant within the massive signage market is more important than ever in an increasingly automated world. Based in Prunedale, California, the company has been owned by sign craftsman Phil VanderKraats since 1981. Phil now partners with his son Jeremy, who manages the business side of the operation. Signs by Van focuses on creating handcrafted, unique, three-dimensional works of art for its customers—something that is becoming less common in the signage industry. As the world of sign making becomes more automated, small businesses like Sign by Van face real challenges to keep pace.

After the stock market crash in 2008, Signs by Van—like many small businesses—faced serious economic challenges. Many customers could no longer afford handcrafted signs, and business was becoming scarce. After managing to keep the company afloat, Phil and Jeremy decided to make a major investment in a 5-axis, CNC routing machine from SCM Group. The Morbidelli m100—one of the largest routing machines in the world—could be operated by Autodesk® Fusion 360® to speed up workflows. The investment paid off incredibly, and within only six months Signs by Van was designing and creating beautiful works of art using the router and Fusion 360—in half the time it previously took. The company has evolved once again, and now leads the way in the future of sign making. 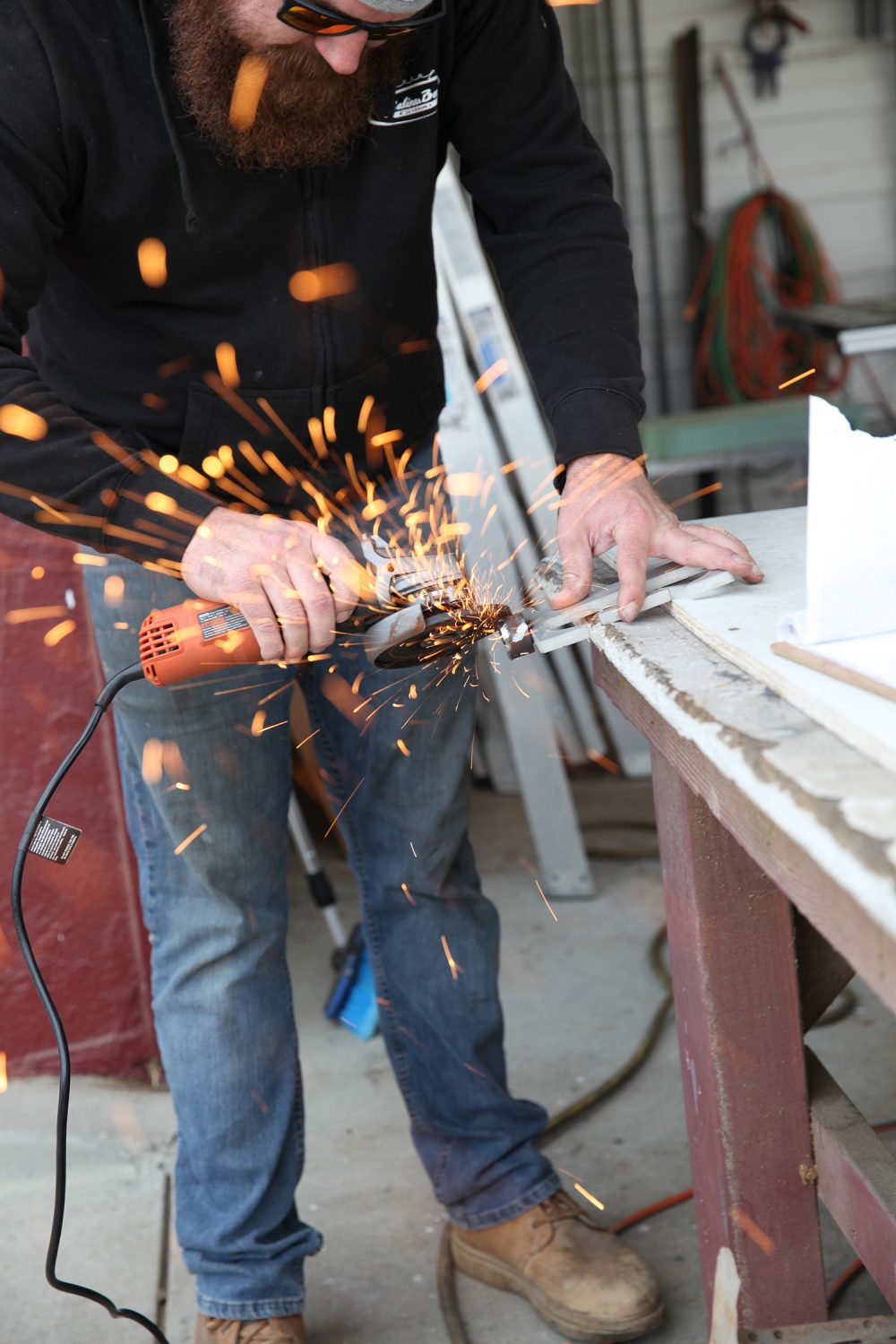 When the United States market took a hit in 2008, many small businesses found themselves in trouble. Signs by Van was no exception. Customers weren’t investing in high-quality signage anymore, and those that were wanted to pay much less than the product was worth. Many sign companies scaled back their operations, offering a simplified product at a lower rate in order to turn a profit. Phil, the sole owner of Signs by Van at the time, maintained an unwavering commitment to quality and craftsmanship in his signs—often at the expense of profit margins. With between seven and ten employees relying on him, business was tough, and Signs by Van nearly had to shut its doors for good. 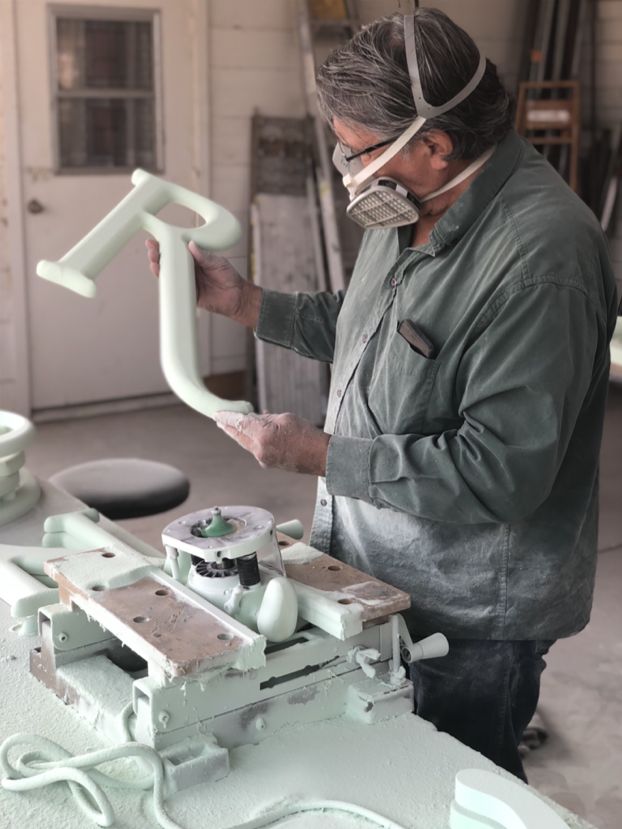 Phil’s son Jeremy saw what was happening to his father’s business and took action. In 2013, Jeremy joined Signs by Van as a co-owner to handle the operational side of the business. Through new marketing strategies that leveraged social media, Signs by Van began to see success by reaching new customers.

Despite these improvements, Jeremy and Phil recognized the need for Signs by Van to make a serious investment in the future. After some discussion, the team made a $150,000 investment in the Morbidelli CNC Router. The router would help the team manufacture more complex signs and art pieces more efficiently, increasing the opportunity to grow their client base. On the whole, it was a promising investment. 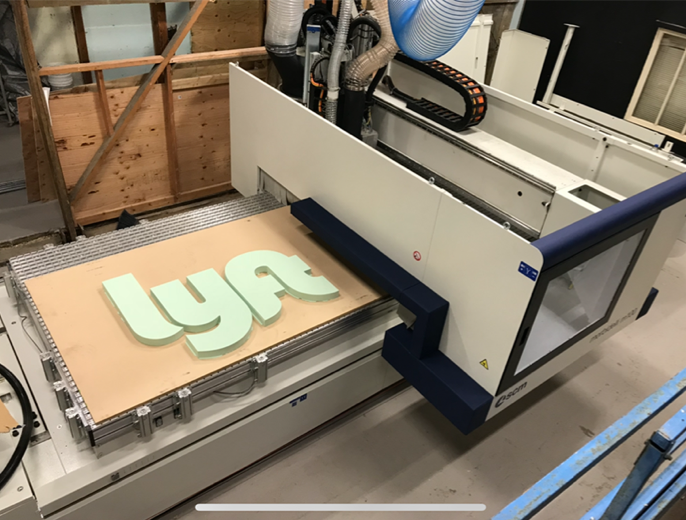 The CNC router Signs by Van purchased is a computer-controlled machine that converts g-code data into a final, routed product. Data tells the machine how to carve a piece of material into a unique signage design. Without completely accurate data, the resulting sign could be flawed—leading to wasted materials, money, and time.

After testing competitive software, Signs by Van decided to test Fusion 360 on the Morbidelli router potentially a first for the signage industry. The company was already familiar with Autodesk® 3ds Max® and other software solutions within Autodesk’s Product Design and Manufacturing (PDMC) collection. Fusion 360 synced with 3ds Max easily, and Signs by Van began using it for Adobe Illustrator data conversion.

Pioneering the use of Fusion 360 for sign making meant there was no success map for Signs by Van to follow. Jeremy, Phil, and the team worked closely with Autodesk Partner Eric Strassheim at NexGenCAM, as well as the techs at SCM group. NexGenCAM was instrumental in encouraging and guiding the adoption Fusion 360, while SCM group helped troubleshoot the adoption onto the CNC router.

As part of the PDMC, Signs by Van has access to Autodesk support benefits that can further smooth out the process of Fusion 360 adoption. A phone call with a Customer Success Specialist at Autodesk helped to highlight these benefits – key resources the team may not have otherwise leveraged. Thanks to all these strategic partnerships, the team successfully developed a post-processor that allowed for seamless communication—from design to router table. 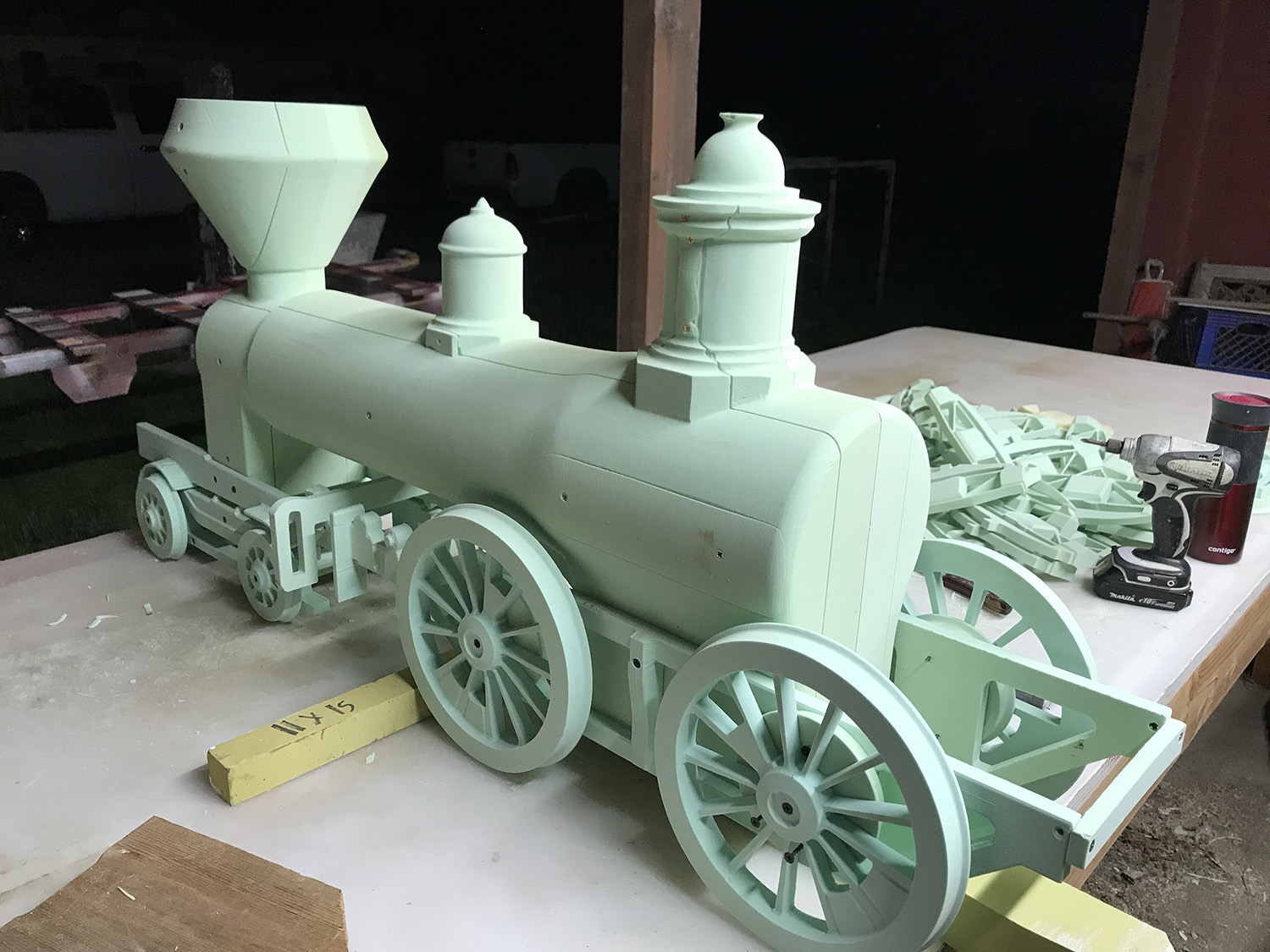 The team describes Fusion 360’s way of functioning with the router as a “closed loop”—the Morbidelli router self-checks for errors with Fusion acting as a thorough fail-safe. Any human errors that occur are flagged by the software with the router working in sync. Because of this, potential flaws or errors in the sign routing process are avoided, and far fewer materials are wasted. Fewer mistakes means that Signs by Van can create designs with incredible details and have the confidence that those details will appear exactly as the artist envisioned. 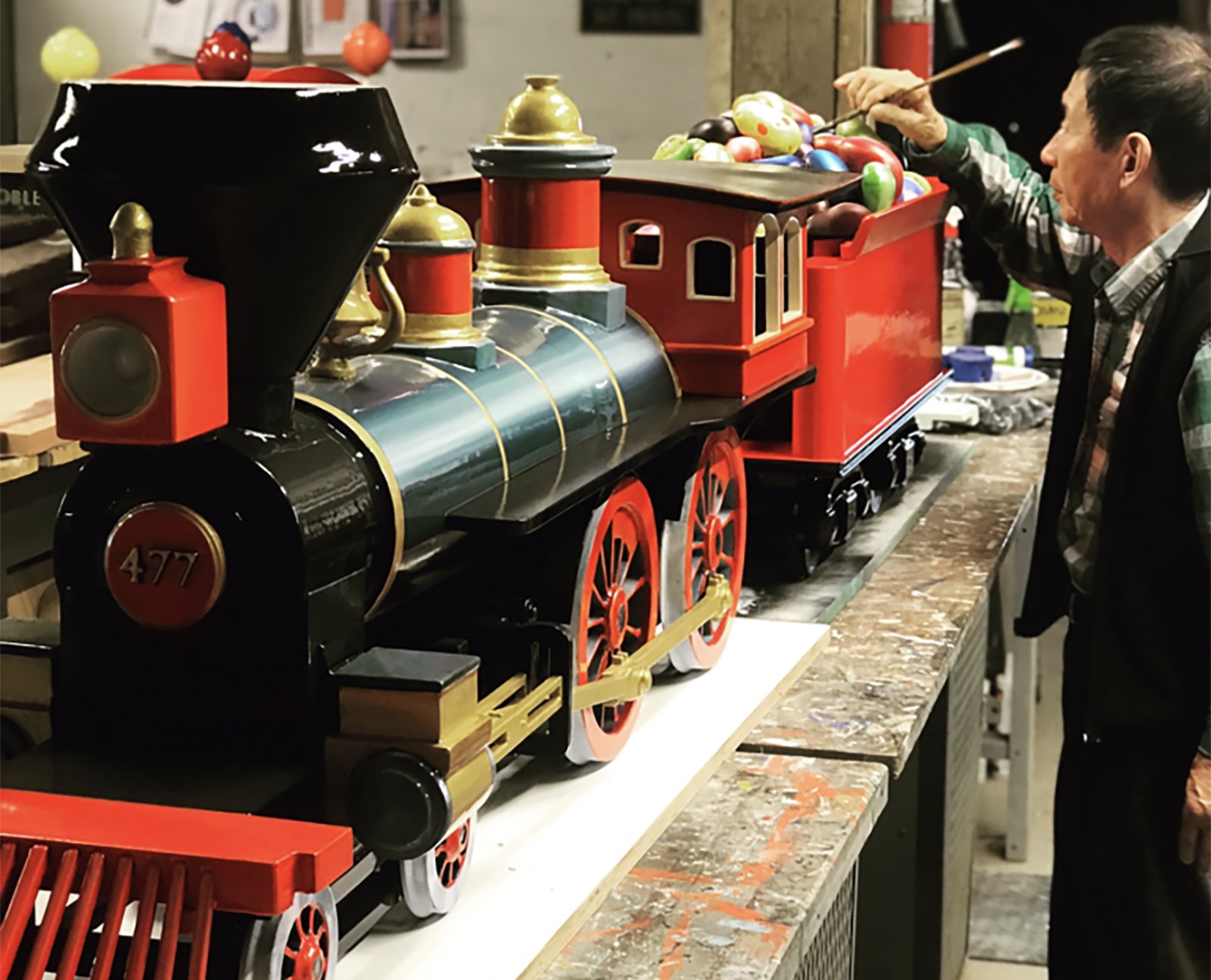 “One of the coolest things about Fusion is being able to run simulations on your programs before you actually cut the material. You can get a very accurate timeframe of how long it takes to route. We know down to about 15 seconds how long it should take to route something. And that's only possible because of Fusion 360.”

Signs by Van can now make beautiful signs with complete accuracy on the first attempt. With previous methods, the team saw a 20 percent material loss in one year, and now sees a loss of only a 3 percent. The company has also cut down annual labor costs by up to 30 percent across the board. In one instance, routing out 54 individual letter forms took only one day using Fusion 360—with the previous software solutions, this would have taken up to three days. The CNC router itself, working with compatible software, can create full 3D sculptures in only a few hours—a task that previously took weeks. 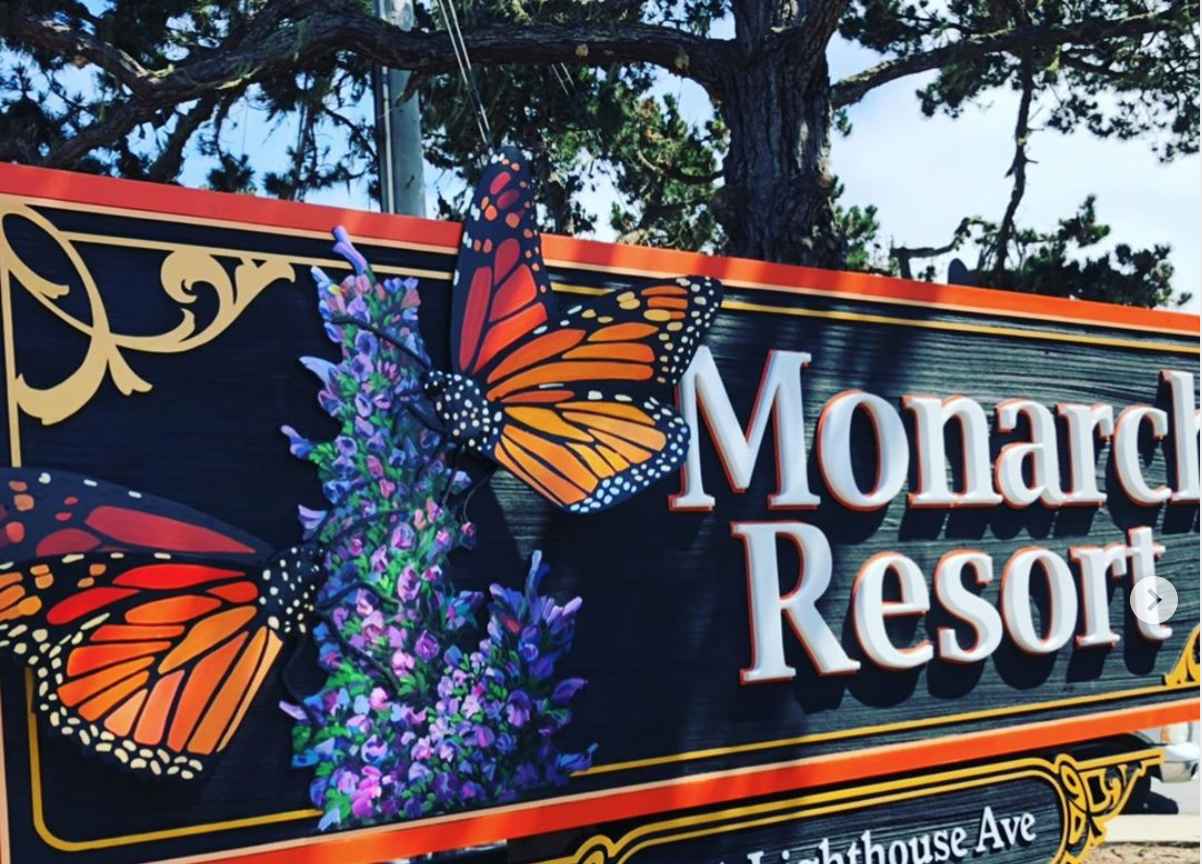 For Signs by Van, the improved way of working has helped the company see tremendous growth in only six months, and the team learns more about the process every day. The signs the company now creates are unlike anything else in the business, and companies seeking signage are starting to notice. Signs by Van has won work with Google, Lyft, LinkedIn, Wal-Mart, and several other major companies. During one competitive project pitch, it took the team only five minutes to convince the client that Signs by Van was the right choice for the business. The winning project was worth $400,000, and Signs by Van successfully demonstrated that their signs were truly unique. 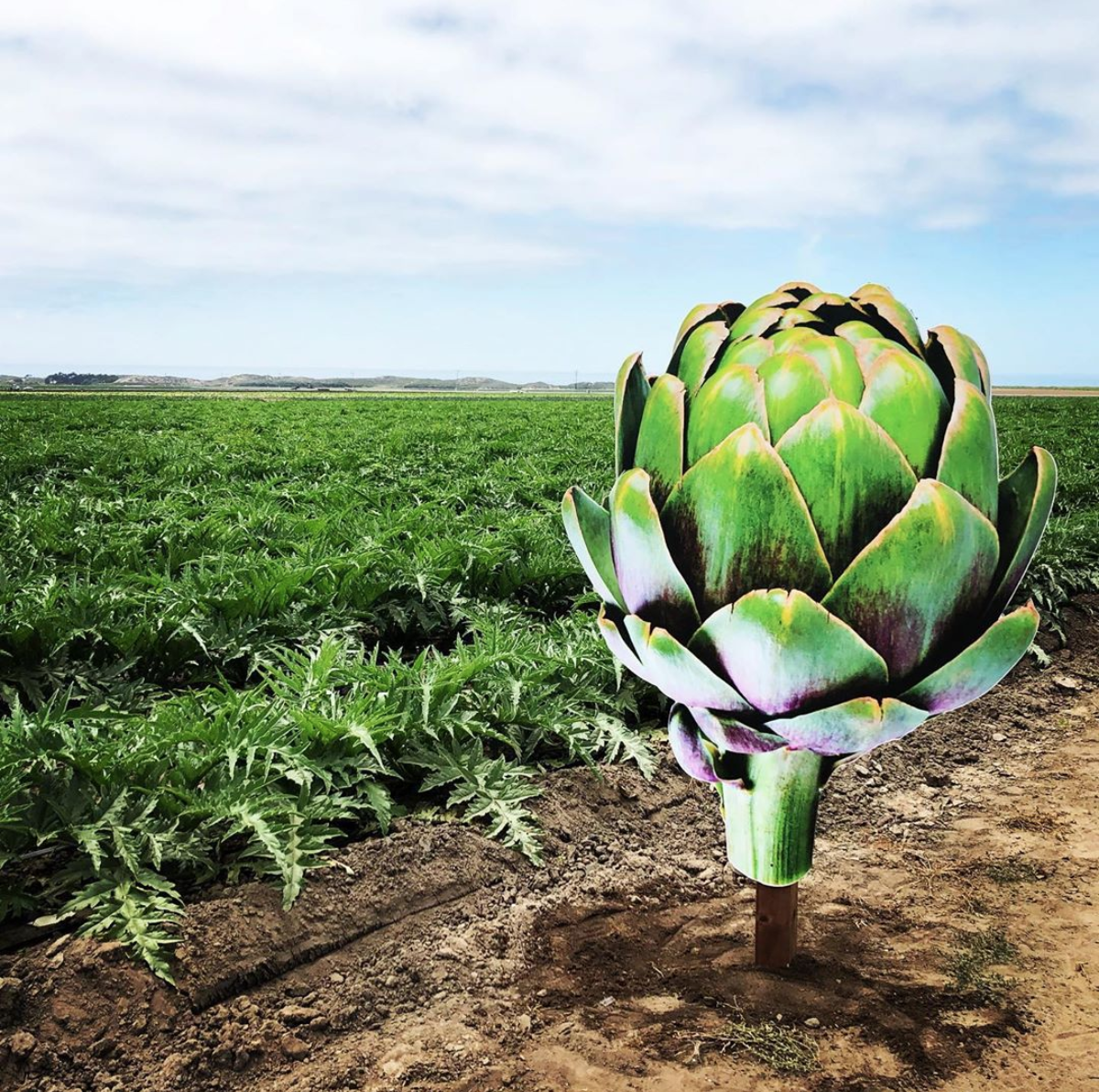 Despite the small crew at Signs by Van, the team is still able to generate a large output—and deliver it creatively. As a company founded on the craftsmanship of sign making, maintaining artistic integrity within each product is essential no matter the process. Fusion 360 now allows the team to generate more compelling, fully realized 3D designs. Once the sign shape has been routed, the creative process has only begun. The team now has more time for detailed painting, precise carving, careful sanding, meticulous gold-leafing, and numerous other disciplines essential to the craft of sign making.

Phil and Jeremy may be one of the first in the industry to pioneer the use of Fusion 360, but the new way of working is catching on. In 2016, “Signs of the Time” magazine named one of Signs by Van’s creations the number one commercial monument of the year. At a signage trade show in Las Vegas, the father and son duo talked about the use of Autodesk solutions to about 6,000 sign shop owners. The response was overwhelming: almost everyone they talked to saw the potential for Fusion 360 to completely reinvent the signage industry. Signs by Van is pioneering a new way of working in a massive industry. After all, every business needs a sign. But not all signs are made with the precision of advanced software, and perfected by years of artistic skill and craftsmanship. 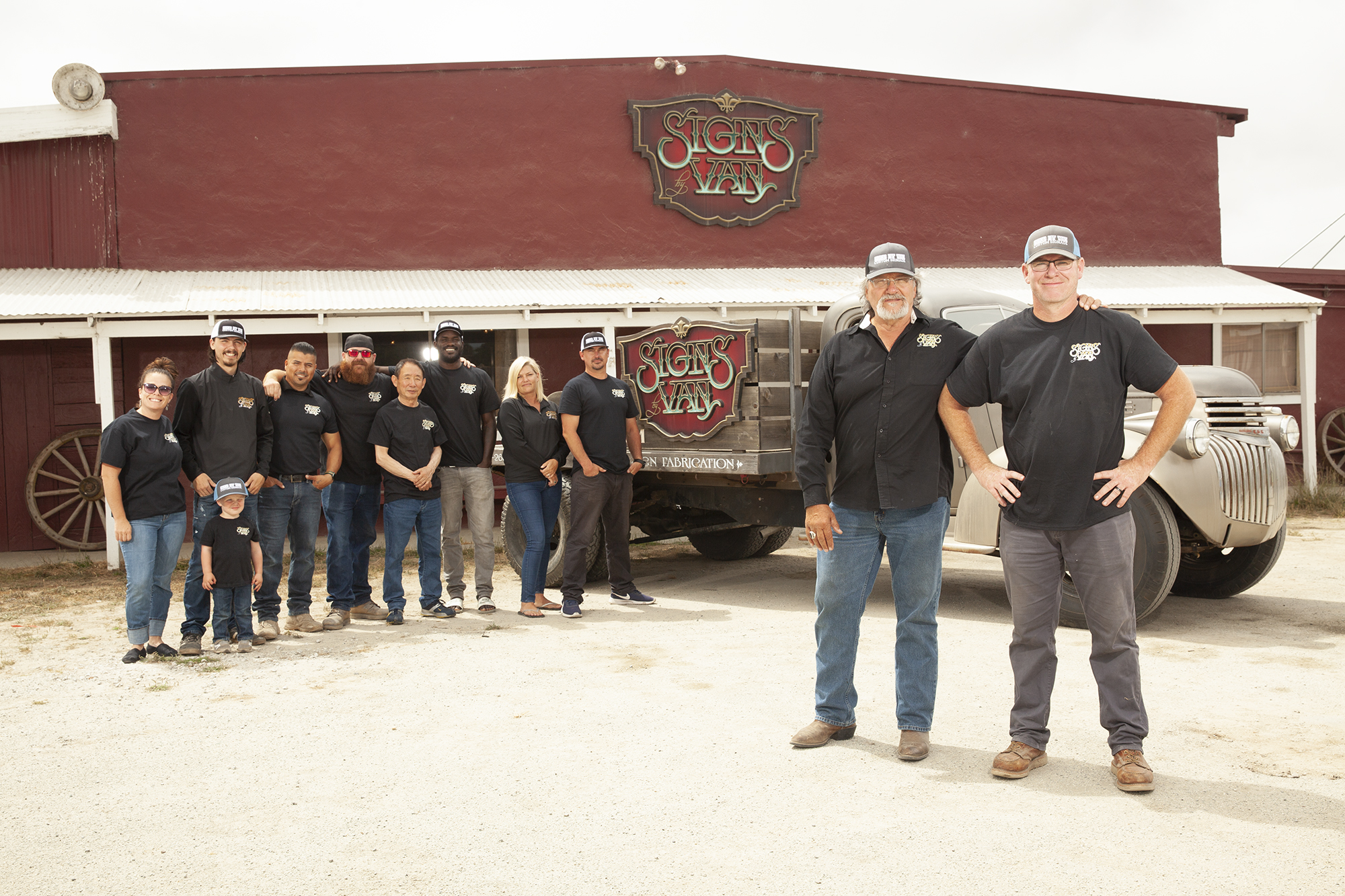 “The older programs that we used to use, the ones that are still widely used and widely accepted as the industry norm for sign making, don’t compare. People just don't know about Fusion 360 and how it works with Adobe illustrator. If they only knew that the two were compatible, that would blow it wide open. CNC machining with Fusion 360 is going to be the future of all of this. This is where it's going.”

For tips, tricks, how-to’s—and cool pictures of signs—follow Signs by Van on Instagram.