Over the past few years, McCarthy Building Companies, Inc. has branded itself as a leader in 3D coordination on all project types, regardless of delivery method. By partnering with Autodesk and strategically leveraging Autodesk solutions, the 155-year-old company is proving its future-readiness. With this in mind, the teams at McCarthy are always looking for ways to improve. The company has a new Integrated Virtual Builders (IVB) philosophy that informs all new technology decisions across the organization. The goal is to carefully define building information modeling (BIM) and virtual design and construction (VDC), getting all stakeholders on the same page and creating a seamless working environment.

Taking this philosophy to heart, McCarthy recognized an aspect of the pre-construction workflow in need of improvement through automation. Any project that involves 3D coordination and housing model files on the cloud must have a highly accurate digital set up. Creating the digital workspace sets the tone for the project, keeping all stakeholders aligned through preconstruction and construction. McCarthy wanted a way to not only streamline the setup of this workspace, but also to ensure 100 percent accuracy. By partnering with Autodesk to create a custom Forge tool, setting up the digital workspace for project teams is now fully automated—further ensuring the success of all projects with early and lasting 3D Model organization and clarity of expectations for all team members. 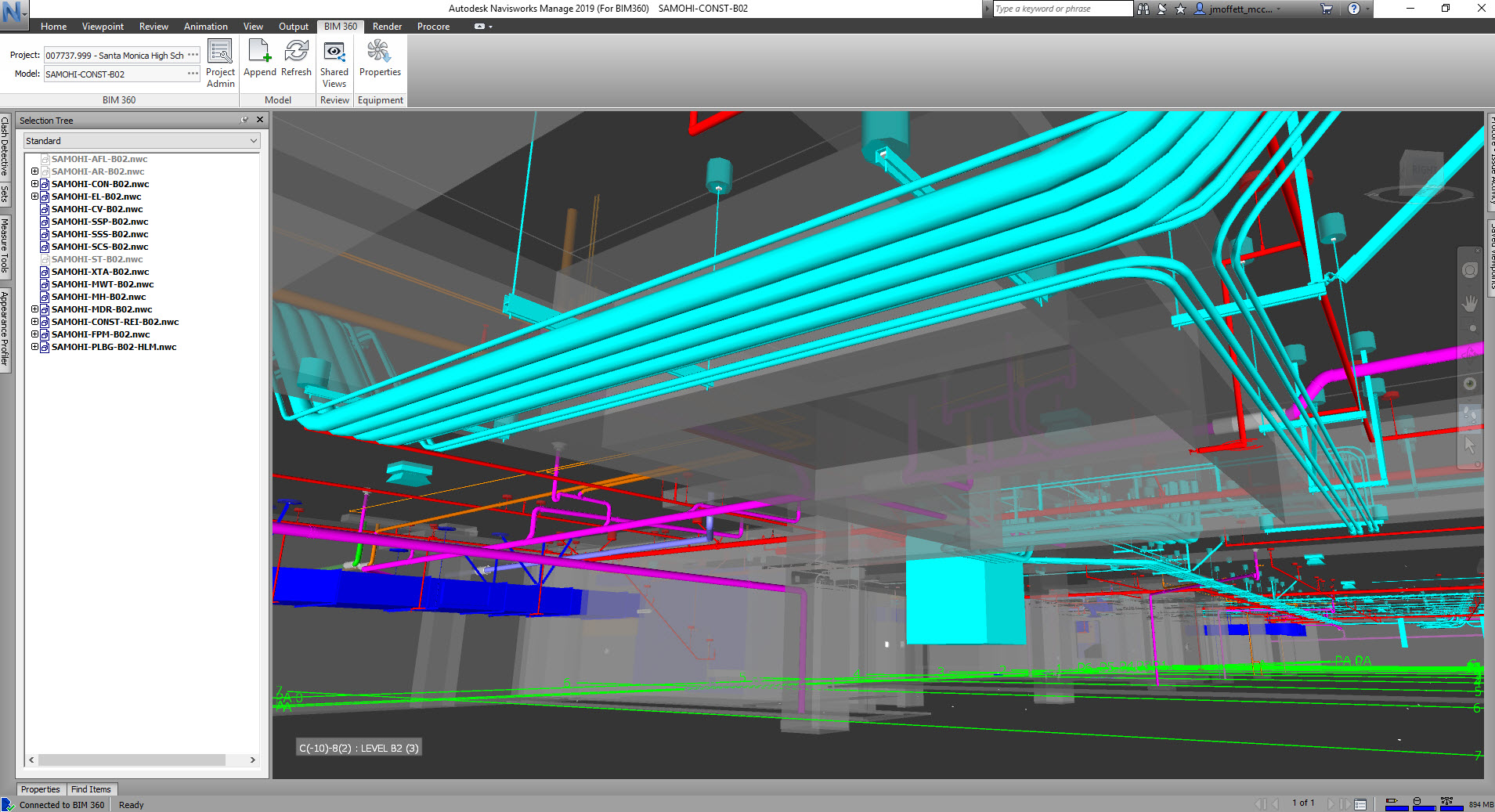 Once 3D coordination is underway on a project, McCarthy teams across the country experience successful preconstruction, construction and project closeout phases. But getting started with 3D coordination could be time-consuming. Creating the cloud environment that project teams will work in is a manual process that, once underway, can delay the start of the project by up to two weeks. In total, the team could spend between 24 and 40 hours setting up folders, programming the digital environment, and troubleshooting any issues before teams could even begin uploading model files.

Until the folder structure is in place, team members can’t upload model files, which in turn delays the start of project coordination. Once files are uploaded, teams go through a process of re-naming and re-uploading any model files that don’t align with naming conventions or other standardized file practices. After spending up to 40 hours setting up the project’s digital space, this rework process added to the administrative duties that could delay the start of the project. With over 100 of these building information modeling (BIM) coordination processes occurring each year, McCarthy realized that cutting down on unnecessary administrative tasks could open up more opportunities for innovation and improved project delivery.

As a long-time EBA customer, leveraging this program and the Autodesk software development team was a natural fit. The McCarthy team was able to creatively explore the options that would best suit its needs. The team knew they wanted some kind of interface that teams could interact with to solve for these delays. After some exploration, they ultimately chose to create a customize Forge platform that would integrate with existing BIM 360® software solutions.

McCarthy and Autodesk first tested the new solution on existing projects that already had a manually created folder structure. The team went through between 10 and 12 test projects, correcting code along the way to ensure the tool functioned with 100 percent accuracy. In early summer of 2019, the team first used the tool to on its first real project—a high school building in Santa Monica. Phase two of rolling out the tool will track future projects as they use the tool, ensuring the user experience is optimal. 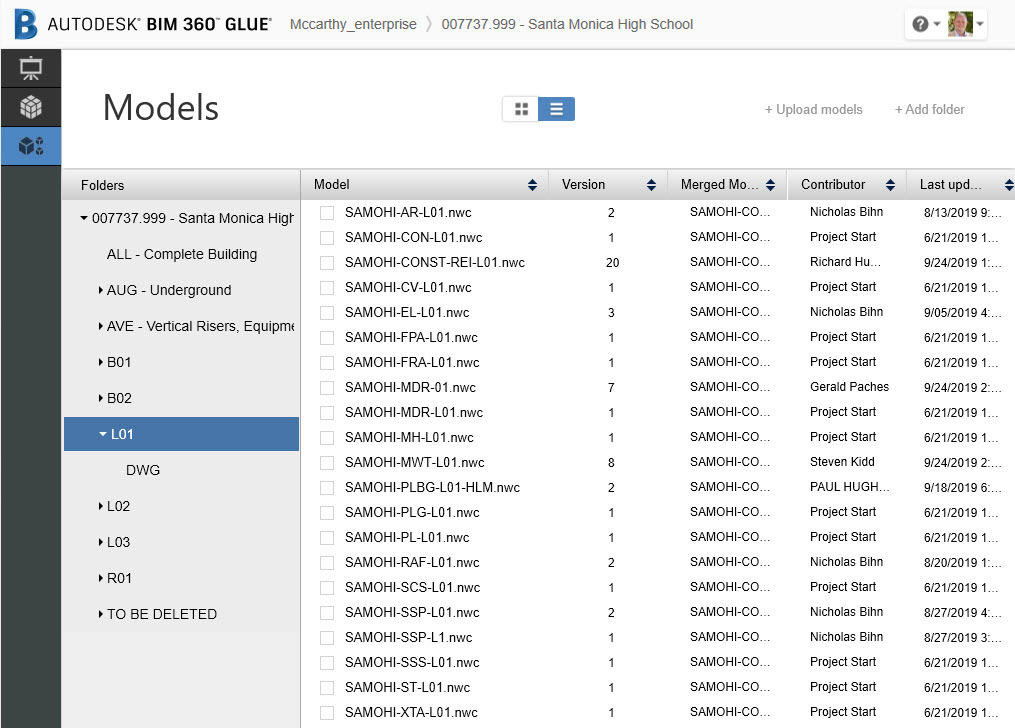 The new solution uses data collected from project teams in advance. This information informs the tool and tells it how to create and organize the digital environment, including folder and file set up. This solves both the delay in project start time and the misalignment on naming conventions. The Forge tool automates and speeds up the project start by generating the cloud environment with file folders that are accurately named and organized. In addition, “base-line” model files are automatically created within the folder structure and titled according to naming conventions. Instead of uploading model files manually, teams now simply find the file that corresponds to their team, then make relevant updates and changes to kick-off the coordination process.

Starting all projects seamlessly and with all teams working under the same structure sets the tone for improved coordination across the entire 3D coordination effort. Setting up the digital cloud now only takes 10 or 15 minutes, saving McCarthy almost 40 hours per project. With up to 100 new projects starting across the United States each year, McCarthy saves itself and the teams it works with close to 4000 hours annually by avoiding project start delays. This saved time increases the ability to deliver projects on time or even early, saving McCarthy, its partners, and the client money.

With improved project delivery times, trade partners no longer have to spend time uploading and renaming files. The ability to edit the automated files in the digital project space alongside the architects and designers means any potential project issues can be detected earlier. Early clash detection means fewer issues will be detected during the construction phase, further improving project delivery time. McCarthy clients are now receiving a better overall experience—proving to future clients that the investment in a digitized construction company and VDC teams is well worth it.

The new Forge tool fully aligns with McCarthy’s new IVB mindset, aligning all stakeholders on the project—even before the project begins. By setting the tone with accurate automation and enhanced collaboration, McCarthy is continuing its goal of being the best virtual builder in America.

“It’s extremely intuitive to use. All the info that feeds into the startup utility is info we collect from the startup team in advance of the process – we have it in our BIM execution plan. It’s simply a matter of translating that data to the startup utility. The tool has allowed us more time to do things that computers can't do, bringing value, collaborating, and integrating with teams better in all areas.”