To minimize the need for costly, time-consuming changes to design and construction documents, CannonDesign began using Autodesk® Navisworks® to perform routine clash detection earlier in the design and construction process. Based on the meaningful cost and time savings the firm has already seen on several recent projects, CannonDesign aims to make "clash prevention" part of its standard workflow.

Founded as a small, family architecture and engineering shop more than a century ago, CannonDesign is now a leading international design practice—offering architectural, engineering, and construction (AEC) expertise as well as advisory and facility optimization services. In 2017, Fast Company named the firm one of the world’s ten most innovative architecture practices. From its offices across the United States and Canada, as well as in India and the United Arab Emirates, CannonDesign serves clients in a host of major markets, including education, healthcare, science and technology, civic, and commercial. As an integrated, global AEC firm, CannonDesign unites a dynamic team of architects, engineers, industry experts, and builders all driven by a singular goal: to help solve clients’ and society’s greatest building challenges.

Over the past year, CannonDesign formed a Virtual Design and Construction (VDC) initiative—a vital part of the firm’s Practice Integration Team in leading the development and implementation of VDC project development, project delivery, and quality standards. This firm-wide initiative drives a consistent, integrated, and collaborative project delivery method for solving constructability issues, aiming to enhance the certainty of project outcomes; improve coordination; adhere to project budgets and scope; and reduce the total costs of operation. For the benefit of both CannonDesign and its clients, part of this effort has been to target opportunities for saving time and money—and to create workflows that maximize those opportunities.

Challenge: Architects often leave clash detection to the builders to handle. “The perception being that [clash detection] was always something that was done elsewhere,” said Brian Skripac, CannonDesign’s director of virtual design and construction. While this method succeeded in identifying clashes, it became inefficient by requiring the design team to always go back and make costly, time-consuming changes to the design and construction documents. In addition to causing delays and increasing costs, these forced changes could also compromise the original design intent.

“I think it’s a traditional architectural process hurdle—we say we don’t have time to worry about coordination during the design process, but we always seem to have time to fix it when it’s a problem in the field.”
Brian Skripac, LEED AP, CannonDesign

As CannonDesign has grown its practice and expertise to encompass construction, the firm has begun to look at the process from both the design and construction points-of-view—raising its awareness of how these coordination issues could be avoided during design. “It became an opportunity to find a way to spend fewer hours and less of the budget on construction administration,” said Skripac. CannonDesign wanted an alternative to developing a project delivery platform that could inherently avoid expensive change orders and project delays.

Solution: As a recent Enterprise Business Agreement customer with Autodesk, CannonDesign had access to the company’s full line of design tools and solutions, including Autodesk® Navisworks® Manage—a project review software routinely used to detect clashes and interference. Having seen clashes arise in previous projects, CannonDesign chose to invest more time on clash detection up-front—at the end of the construction documents phase—on several of its education facility projects. By utilizing Navisworks earlier in the process, the firm’s goal was to better anticipate and reduce potential clashes before construction, and to save more time and money in the long run. In doing so, clash detection essentially became clash prevention.

[We want to] continue to position ourselves for growth by making that model more reliable and trustworthy and predictable—rather than just saying, ‘Hey, it looks good on paper.’
Brian Skripac, LEED AP, CannonDesign

The addition of a proactive clash prevention BIM use to the firm’s workflow aligns with CannonDesign’s VDC initiative. “It is really the evolution of VDC and driving a process for a new standard of care in the development of reliable, multi-disciplinary, model-based deliverables that support the Design-Construct-Operate continuum at CannonDesign. These changes are driving bottom-line cost savings,” said Skripac.

Success: One of CannonDesign’s recent projects—a new, 250,000-square-foot, academic facility—had already gone through a series of clash prevention reviews with the project’s external construction team. To identify and address any outstanding items, CannonDesign’s project team worked with its VDC team to run additional clash reporting at 95 percent construction documents. By spending less than 12 additional hours prior to submitting models to its build partner, CannonDesign saved more than 245 hours in potential work during the design and pre-construction phases on this one project. As a result, the team avoided potential requests for information (RFI) that could result from 164 clashes—for a total savings of at least $177,000.

*The 2017 Open Integration Summit cites (in reference to the 2014 Navigant RFI report) that, on average, an RFI takes eight hours to respond to at an average cost of $1,080.

While these numbers are approximations and not every clash results in an RFI, many will—including some that may lead to a costly design change, construction change directive, or change order.

Two additional examples of how CannonDesign used Navisworks to avoid clashes successfully—saving both time and money—are: 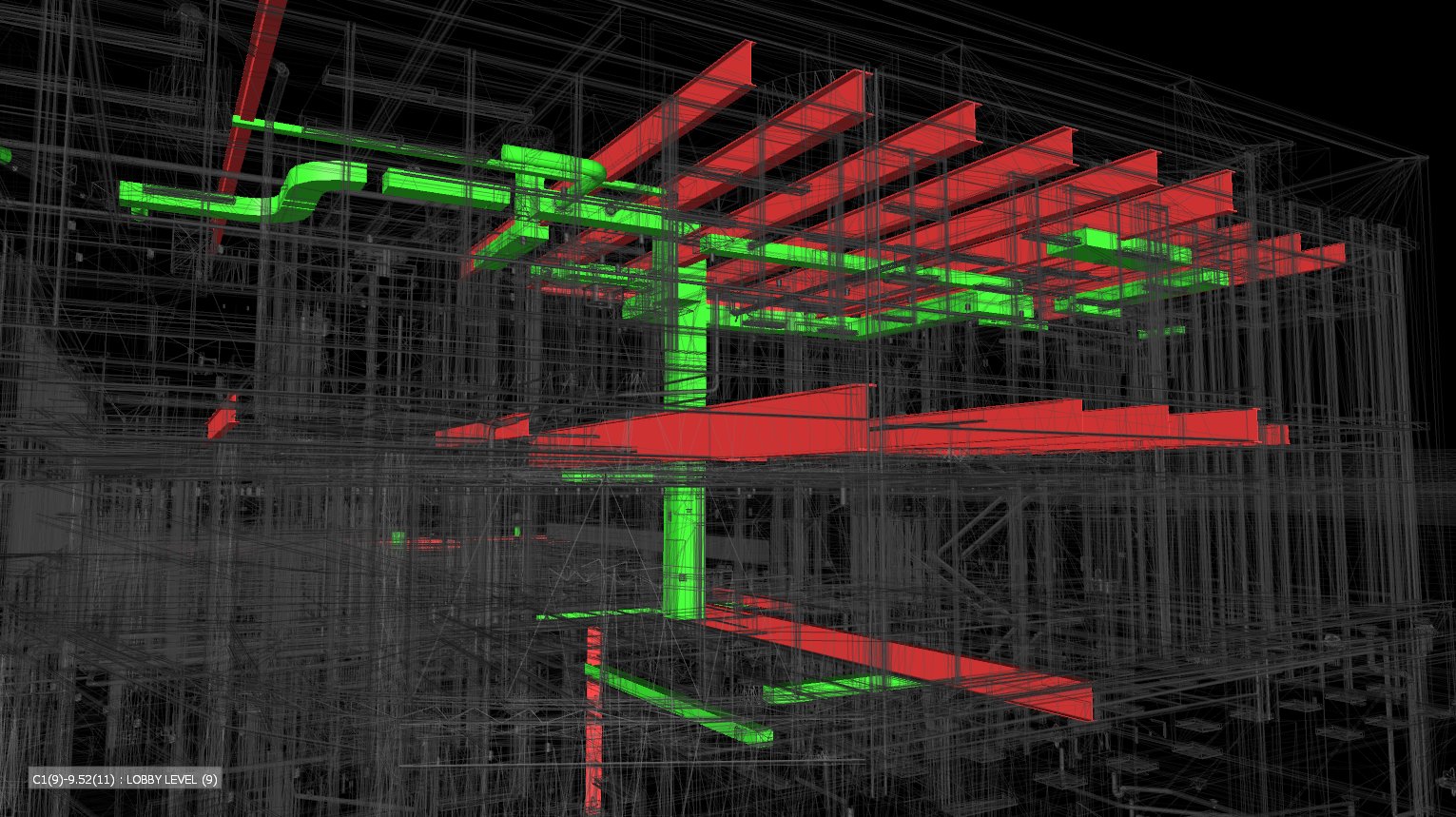 “What we’re saying is: ‘Look at these numbers…here are all the items we need to focus on, so they don’t become issues down the road. Let’s deal with them now while we have the chance to make adjustments. When the design is still flexible, at this earlier stage, let’s use this as an opportunity to continue to validate what we’re doing.’ That’s been an important part of how we collaborate and communicate, as well.”

Based on the positive results and savings CannonDesign has already achieved on projects, the firm recognizes the value of clash prevention and continues to implement these processes as an important part of its BIM use workflow. Looking ahead, the firm believes the return on investment can be even more significant when proactive reviews occur earlier in the design process—a theory CannonDesign is now testing on one of its new healthcare projects.