Building Before Building: Colas creates an intelligent bridge model, saving time in the design process to better plan, coordinate, and carry out construction

Top image: illustration of the view under the new bridge. Image courtesy of Colas SA.

Réunion Island is a small, French territory off the coast of Africa. The Rivière des Galets runs northwest to the Indian Ocean, south of Le Port—the island’s main seaport—and crosses under N1, one of the island’s major highways and only motorway connecting its two largest cities—Saint-Denis and Saint-Paul. At Le Port, the riverbed is close to 300 meters wide, but typically only has a few channels of running water. However, during annual tropical cyclones which are common to this area, the rainfall can completely fill the river to its banks.

Réunion commissioned the French engineering company Colas to build a new bridge over the river via N1. The 430-meter mixed-metal structure is being built between the two existing bridges to keep traffic moving during construction. The work was done in joint-venture between Colas and Demathieu et Bard. The new bridge will have three lanes in each direction, plus a pedestrian and bicycle lane. Four piers with foundations in the bedrock below the river’s alluvium sediment will support it. Once the new bridge is in use, the existing metal bridge and piers will be demolished, along with the entrances to the existing concrete bridge. Thanks to the strategic use of BIM solutions and 3D modeling, Colas generated intelligent models that improved the efficiency of project planning and will help ensure completion in 2020. 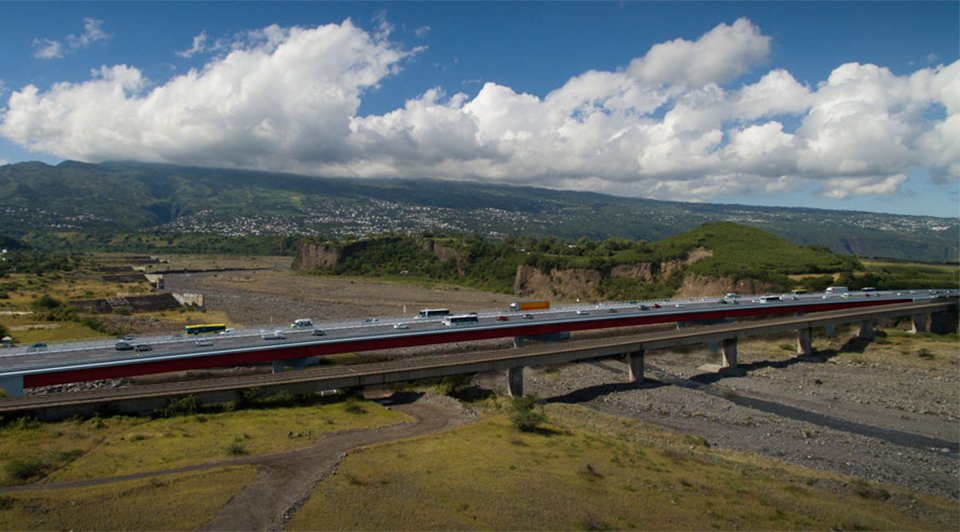 Nearly 70,000 vehicles a day cross over the river on N1 via two existing bridges. One is a two-lane concrete bridge that carries traffic south to Saint-Paul, and the other is a two-lane metal bridge that carries traffic in the opposite direction toward Saint-Denis. These two-lane bottlenecks can cause heavy traffic backups. The metal bridge was built in the 1950s, and its age poses safety concerns, particularly during annual cyclones when the river becomes dangerously powerful. The area needed a new bridge that could accommodate for both traffic and extreme weather conditions.

Building the new bridge between the two existing bridges means the trades have to be carefully aligned in order to properly coordinate physical movements and the storage of equipment and materials. During the dry season, construction is accelerated, creating even tighter movement and space restrictions. 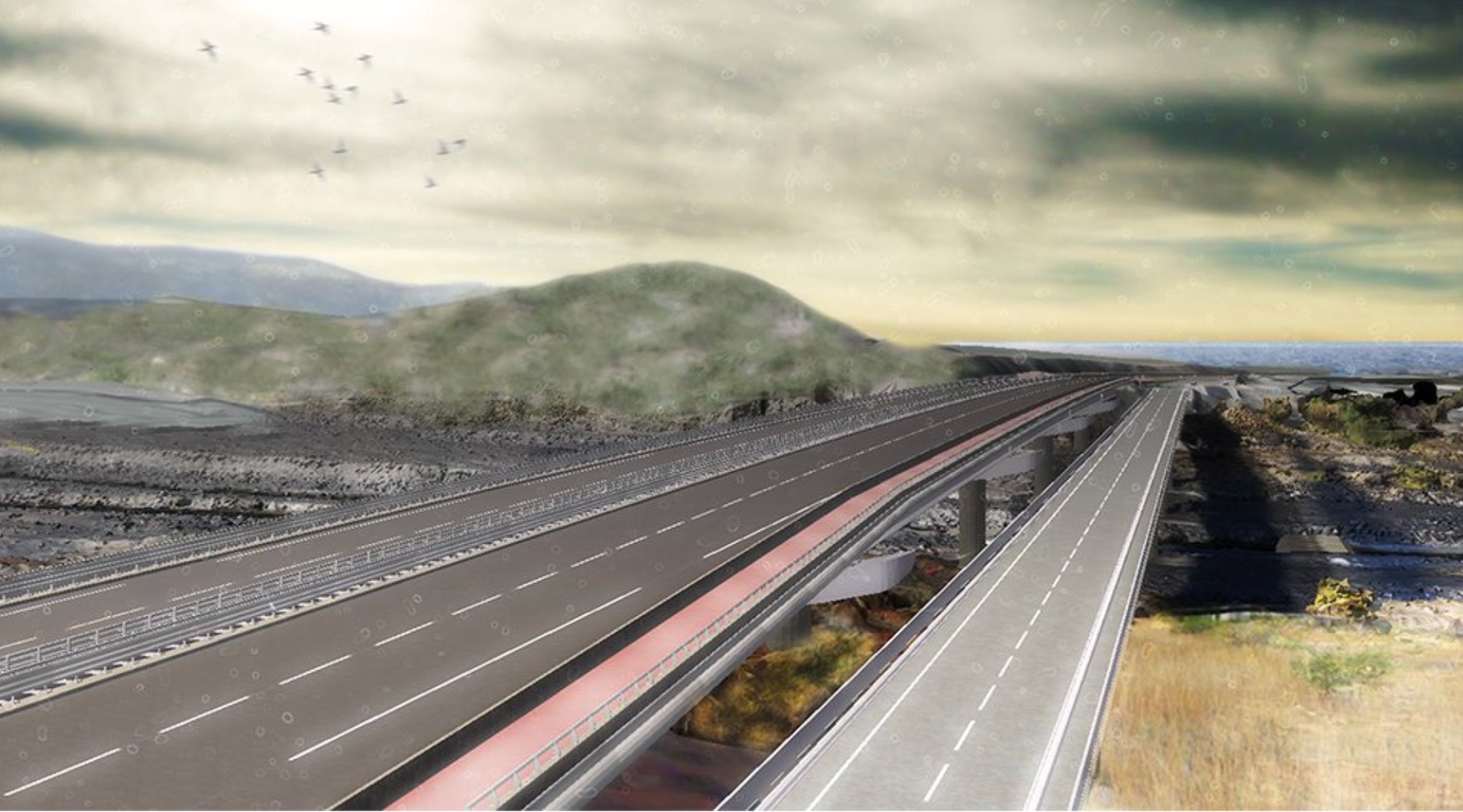 Throughout the design, Colas relied on BIM processes and intelligent 3D models. These models are now the basis for ongoing project coordination, collaboration, and construction planning. The firm created a series of discipline-specific design models for the project. The bridge itself was modeled with Autodesk® Revit®, as was the project’s mechanical and plumbing systems. The earthworks, road, and utilities infrastructure were modeled using Autodesk® Civil 3D®. During design, these models were combined in Autodesk® Navisworks® for multidisciplinary project costing, coordination, and clash detection.

Colas used Navisworks to link the 3D models to a construction schedule for 4D planning, phasing, and schedule simulation. The individual trades update the models to reflect current project situations and changes, leading to improved project coordination and collaboration.

Colas performs regular photogrammetric surveys to track construction progress and detect changes to riverbed conditions due to rains. This enables the team to better monitor and manage construction and earthworks. The models and other project data are uploaded to Autodesk® BIM 360®, supporting cloud-based project communication and facilitating better-informed decision making. 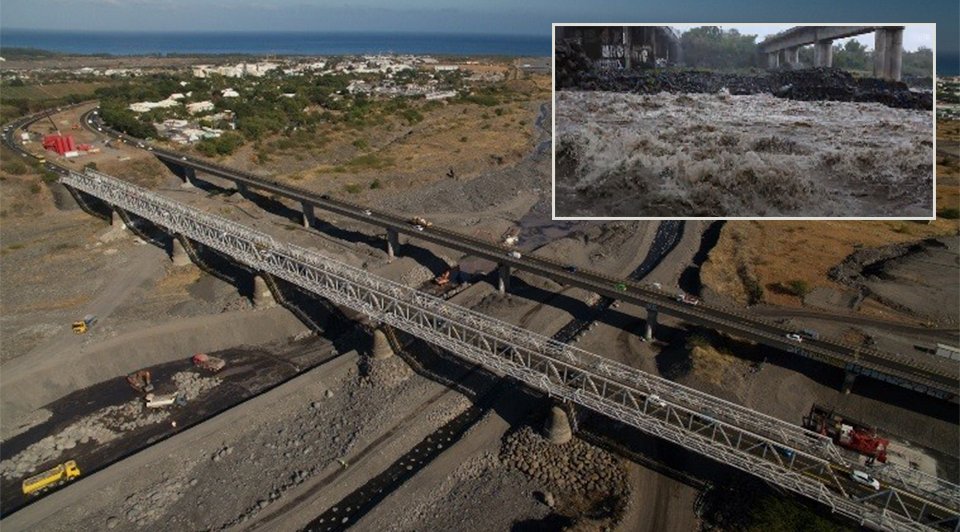 “This is Réunion Island’s first major BIM infrastructure project, and it has been a huge success, helping us overcome the many challenges related to the bridge’s technical and environmental constraints. The project stakeholders and contractors have embraced BIM because it gives us the ability to virtually build before building.”